Adoption. To me, the word means not only the expansion of my family, but a fulfillment of a dream.

Many years ago, when I was still in college, I knew in my heart that someday I wanted to adopt. I was a nanny for two little girls adopted from China. One night, as I rocked the baby to sleep, I looked down at her perfect little face and the wind just sucked out of me. In an instant, I saw what her life would have been like as a female orphan in a place that had little value for the life she had. The blessing she had found in this home of people who loved her before they knew her was almost unfathomable. And here she was, warm in my arms, safe in their home, with those little contented baby sighs, showing all is at peace. I knew in that moment that someday I would offer the same to a child.

Time marched on, as it tends to do. I married my college sweetheart, and we had a biological son. We signed with him, of course! And we saw all the amazing learning, bonding, and behavioral benefits we were promised. Using Signing Time with him was such a joy; I became a Signing Time Academy Instructor, and shared signing with so many other families and educators. 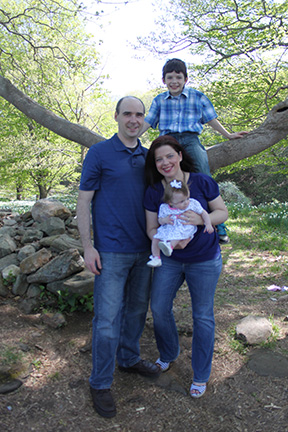 I still wanted to adopt, but life was throwing us some pretty big curve-balls. I got really sick and, suddenly, not only could I not have any more children of my own, it looked as if I may not ever be well enough to adopt either.

Well… if you know anything about the Signing Time story, you know that absolutes are never as final as they may seem. It would be the same for us. I battled my way back to health over a few years, and suddenly the stars aligned. We were ready to fulfill the adoption dream from so many years ago.

There are many paths to adoption, each with their own benefits and pitfalls. We ultimately chose to go through the foster system and adopt a child from our state who was in need. After nearly a year of classes, paperwork, home visits, and preliminary matches on children that ultimately fell through, the long awaited call came.
My husband and I drove to a NICU an hour from our home and a nurse placed a 28 day old, four pound, baby girl into my arms. Our social worker is fond of reminding me I cried. I remind her it was just a little bit. Baby E was so very tiny. She’d had a pretty tough start in life, but oh, she was a fighter. Nobody in the NICU could believe how well she had done, and even the nurses there had been inquiring about taking her home when it became clear her birth mother was not going to be able to. She was just that sweet.

In the foster system in our state, reunification with the birth parent is always the goal. Yet at the same time, the social worker will pursue an adoption placement for those children who have a higher likelihood that they will not be able reunify. Thus, we were known as a “legal risk” family. Adoption was our goal, but it was not promised for many months.

So, what do you do with a child whom you have been charged to care for and nurture, but may not be able to keep? The falling in love part is easy. Allowing yourself the vulnerability to bond is hard. So hard. And yet, you really have no choice but to love and risk the loss.

I found signing to be a perfect tool during this uncertain time. I love to sing and I love Signing Time. While I cuddled with E on the couch, I would sign the little songs we would sing. I would run through the Baby Signing Time repertoire. The ABCs were always a good fallback too. As she became more alert, her little eyes would fix on my moving fingers and she would be completely still and engaged. We were bonding and relaxing into the moment. Sometimes with all the social workers, and lawyers, and baby therapists, and doctors, it could be hard to relax. When we signed, we escaped all that.

While we both benefited from the emotional bonding, E was benefiting cognitively too. Her start in life means she may have some delays, or she may be just fine in time. We really don’t know yet. But I knew from all my years as an Academy Instructor and trainer that there was no better tool than sign language that I could offer her for cognitive growth. The multi-sensory nature of signing offered her a visual, auditory and eventually kinesthetic (touch) modality of communication. Even if her speech is delayed, as it well may be, she will have language. That is priceless!

The first time I showed her a Baby Signing Time video her eyes grew huge. She was about six months at the time, and so she only had a few minutes attention span, but it was enough.

Her first sign came at around eight months, just before a big change in our world. Her adoption was finally able to be complete! She started signing DOG for Rocco, our loveable mutt. She was engaging with, and naming her world… months before a typically developing child will talk.

The second sign was a bit longer coming. But at just 11 months she began signing MORE. That child will do anything for a puff snack! Now that we have two concrete signs, I expect she will just start adding more at a rapid rate. She’s made the connection between the signs and their meanings, and we’re having an awful lot of fun as a forever family.

I have always been grateful for what Signing Time has provided for my family. As we’ve navigated the crazy, bumpy ride of adopting a foster child, I am even more grateful for the tools it gave us to bond and teach this little bundle while we were on the journey to have her become ours.

Media and Children Under Age 2

How Do I Help My Child Create Good Sleep Patterns?