If you watched the media coverage of Hurricane Sandy recently, you may have also noticed there was a bit of a buzz over the interpreter who stood by New York’s Mayor Blumberg offering up his message via American Sign Language (ASL). There was, unfortunately, some negative hype over her expressive way of signing. On the other hand, it also opened the door to some great conversation on why exactly signing is so expressive.

When you watch someone who is fluent in ASL, you often can’t help but notice just how expressive they are with both their faces and body language. I most often explain it to people this way: “Think of how we communicate. Relatively little has to do with the actual words we choose. So much meaning comes from the volume and tone of our voice, and our body language and facial expression when we use those words. It’s kind of the same with signing – you have to think of facial expression and body language taking over for volume and tone of voice, which wouldn’t necessarily be used by someone who is Deaf or communicating with the Deaf.”

Kids can understand this concept really well. First of all, their little faces and bodies are often highly animated anyway. You don’t often have to look at a two year old for long before you realize loud and clear how they’re feeling! Signing naturally taps into this innate expression that children so effortlessly can use. 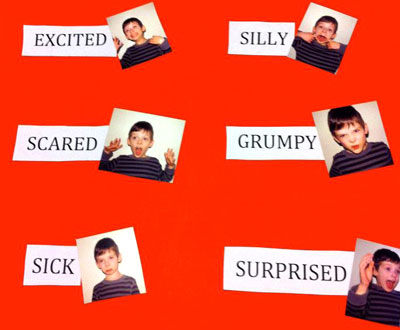 You can have a lot of fun with the natural expression that comes with using sign language. One of the easiest ways to begin to explore this process is through our DVD “Family, Feelings, and Fun”. On this DVD, Rachel teaches the signs for some common feelings. Practice them with your child and make a game out of it! One of you can make a facial expression (and don’t forget some body language to go with it!), and the other can show the sign for that feeling. Kids have a blast with this.

Another option is to make a “Feelings” photo book or set of cards. Check out the pictures on the right for some “feelings” faces I had my son do when I was prepping to teach a “Feelings” class. He had a blast with it, and I’ve used them over and over when talking about feelings with different groups of kids. This a picture of the photos I made on a poster, but I’ve also transferred them onto large flash cards, which might be a bit more practical for home use.

Finally, here’s a quick video by a Signing Time Academy Instructor, Alyson from Little Smarty Hands. Watch as her son, age 18 months, participates in conversation and shows emotions while practicing his signs!