The smallest of things can change your life.

In 2009, a friend sent me a single Signing Time DVD, for my then one-year-old son. He’d had two neurosurgeries and the prognosis surrounding speech wasn’t good. We’d discussed signing with him, but I admit I had no idea where to start. The little I’d tried hadn’t worked, and I was feeling dejected. As we moved into our new home, I popped the DVD into the TV upstairs, closed the baby gate, and started hauling in furniture.

Later that day, I heard my four-year-old asking her little brother “what do you want?” from the bottom of the stairs. I came around the corner to remind her he couldn’t answer her, and saw the most amazing thing. He stood at the top of the stairs, signing BALL, and she tossed him the ball. He’d then throw it back down to her, and she’d ask again, “What do you want, Julian?” to get him to sign. Choking up, I asked where he’d learned the sign. “The orange lady on the TV taught us,” my daughter answered, matter-of-factly.

When I was referred to the Signing Time Academy (STA) a few months later, I didn’t hesitate. The daughter of a speech/language pathologist and graduate student in the education field, I could see all kinds of possibilities for this program. Plus, I knew my son wasn’t the only kid out there with communication challenges, and I’d been unable to find any resources or support for our family. Instead, I decided to become the support. In December 2009, I became an STA Instructor (jumping to the Master level in less than a month, since I’d been taking ASL courses for a bit before finding Two Little Hands), and PDX Loves Signing, LLC will have been in business for a decade this year.

In that time, I’ve become immersed in Deaf culture, lived with Deaf roommates, and traveled to Ghana with Rachel, Leah, and Aaron. I’ve worked for 6 years as an educational and community interpreter, earned a Master’s degree in Deaf education, and started work as a teacher of the Deaf. I’ve supported Deaf folks who wanted to teach ASL in prison, families desperate to learn the language their children are using at school, and had groups over to my home to practice their language skills. Through every step, though, there has been that song, those kids, and that “orange lady.”

When I was teaching classes at community centers in 2010-2011, I found that putting her face AND the STA logo on the fliers did wonders to boost enrollment (1/3 to ½ as many people would sign up). 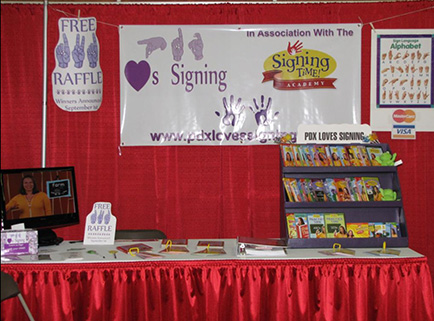 I remember being able to tell parents who were just starting down the road to ASL that it wasn’t impossible because I had done it, and so had Rachel. When my family went to a camp for kids with special needs (intellectual or physical disability), my son’s teenage camp counselor could sign to him because she’d grown up watching Rachel’s taped fingers in elementary school.

My kids dressed up as Rachel and Hopkins for Halloween. The first word my son wrote: Rachel. 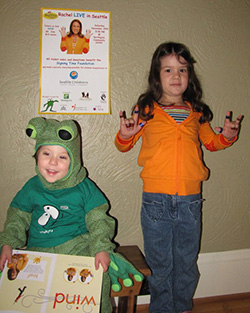 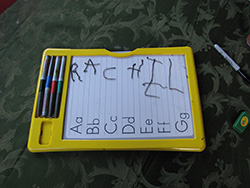 Showing Leah and her hearing dog to my teenage students never fails to astound them. And yes, when we had to get curricula approved to bring to a mens’ prison, the PBS stamp and Grammy nomination turned some heads before it was let through security.

Nearly 10 years later, my kids still sign, although they understand more than they say. My husband is conversationally fluent, and he and my roommate were groomsmen in our Deaf buddy’s wedding. We go to Deaf church and Deaf camp, and volunteer for a Deaf-run haunted house. My son has always had a language he could access, from the first day he was introduced to Alex and Leah.

PDX Loves Signing expanded to include interpreting, advocacy work, and other things besides STA work. I still sell DVDs and digital copies of the program, though. I also teach classes, although with Deaf co-teachers, in the Portland area, mainly for parents whose children have communication disorders/hearing loss/other challenges, and aren’t yet connected to the available resources in our area, and their older kiddos. Every once and a great while, I’ll have a baby class, but more often than that, I’ll gift a program the PreSchool curriculum. People who have babies get BST DVDs as gifts. Why?

Because it’s the smallest things that matter. Just one day, just one sign, can change lives.