We put out our last newsletter with an article by Lex de Azevedo, father of Rachel and Emilie. We have had so many funny comments come to our office, that we thought we would share this with everyone!

Out of the Chaos: Notes on Raising Nine Independent Children 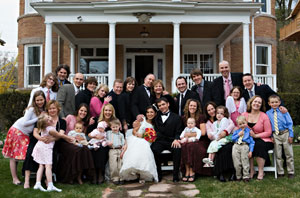 When Signing Time and Two Little Hands Productions started to gain national recognition, I frequently found myself being asked, “How did your daughters do it? I mean, what made them think they could start a national company and produce a series of videos that would become a television series? Did you show them how? Where did they get the idea they could do that?”

Well, a little background might be helpful. I spent my early adult years as a composer and producer in Hollywood. Music was always a big part of our lives and certainly played a role in my children’s upbringing. However, when I am asked how Rachel and Emilie created this amazing project, I think the question is better answered not by genetics but rather by a closer look into the dynamics of the Azevedo Family.

Most of you know Emilie and Rachel as the co-creators of Signing Time and the mothers of Alex and Leah, respectively. However, in our family they are the third and fifth in a family of nine children. You might ask, “How do you raise nine children with only two parents?” You don’t. They raise themselves while you, the two parents, hang on for the ride of your life. As I think about those child-rearing days, the word “chaos” comes to mind.

No one has enough time and money to spoil nine children, and finding it impossible to micromanage their lives, we were forced to adopt a kind of laissez-faire approach to child-raising, allowing them to direct their own lives, solve their own problems and fight their own battles. When it came to dealing with adversity, you might say that I had the mindset of “that which does not kill them will make them stronger.” Many, if not all of my children, have accomplished great things out of the adversity life gave them.

Truthfully, our life was pure chaos in many ways. The house was often as messy as our schedules; coordinating household duties, school and extracurricular activities for nine children was overwhelming. Add to the mix all the relationship dynamics of children in different phases of development and it’s downright intimidating. Even with two parents in the home it was impossible to referee every disagreement. Although any cruel and unusual treatment of a younger brother or sister was forbidden, survival of the fittest reigned in our home. Our kids had to learn to fend for themselves, fight their own battles, and solve their own problems.

I’ll be the first to admit that I really had no clue what I was doing. I do know that I love my kids so much and I have learned from them more than I have taught them. Managing a huge brood included many failed attempts to guide my children where I thought they should go. I don’t think I could have predicted the various paths my children have walked. I always believed they could do anything they wanted. Over the years I began to let go of ‘looking good’ as a parent and realized the most important thing was for my children to know that they were loved and let them make their own choices. Like any family, we’ve had our fair share of hard times, but we’ve also grown really close. Through it all, something beautiful managed to come out of that chaos: amazingly powerful and independent people.

So when faced with the question, “What made Rachel and Emilie think they could do this?” I think the answer is this: it never occurred to them that they couldn’t.

When asked to write this article, Lex began to write page after page of hilarious incidents in the life of the Azevedo family: nine children, two parents, and one cockapoo terrier mutt in the prim Hollywood suburb of Toluca Lake. Watch for humorous and insightful anecdotes from Lex’s Out of the Chaos in future posts.

5 thoughts on “Out of the Chaos: Notes on Raising Nine Independent Children”